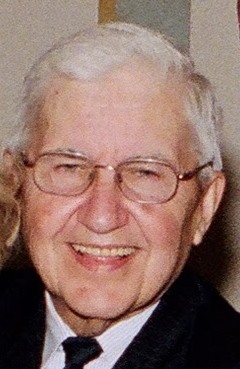 Joseph Pudlo, age 86, passed away peacefully on May 12, 2018, in Louisville, KY, joining his wife Marie in Heaven. He is preceded in death by his parents Mary and Jozef Pudlo, sisters Genevieve Losik and Helen Kleban; survived by his sons Joseph (Gabrielle), Robert (Barbara), Michael and Stephen (Lisa); nine grandchildren; JP, Giuliana, Chrisrian, Tom, Charlie, Lilah,  Arabella,  Henry and Lark. Joe was born March 11, 1932 and lived most of his life in Chicago. He was a Korean War Veteran and later embarked on a career in court reporting, owning and operating a successful agency until his retirement in 1997. Joe’s “job” thereafter entailed spending as much time as possible with his grandchildren, remaining young in spirit by entertaining them with games, stories and endless treats. Married for 57 years, Joe was a loving, supportive selfless provider for his family. Among the things Joe loved most was traveling. This included numerous extended jaunts to Ireland and Poland with his wife and sons and eventually his grandchildren. Joe valued the importance of his family’s culture, especially during the holidays. These events were filled with raucous conversations, singing, laughter and quite often a few tears. Nonetheless,  they were still memorable. A serial storyteller, Joe’s eyes would sparkle as he regaled his audience with extraordinary tales of life’s adventures. Those who knew him can attest to his warm, unconventional charm, generosity and compassion. A lucky few may have even walked away with one of his signature $20 handshakes – or a pineapple. An end of an era, Joe’s spirit will undoubtedly carry on through the retelling of countless “Joe Pudlo” stories by all whose lives he touched. Visitation Friday June 15, 2018 from 4-8 P.M. at West Suburban Funeral Home & Cremation Services 39 N. Cass Ave., Westmont. Funeral Mass Saturday June 16 at 9:30 A.M. at Holy Trinity Church 111 S. Cass Ave., Westmont. In lieu of flowers, donations may be made to St. Jude’s Children’s Hospital. Info 630-852-8000 or www.westsuburbanfh.com